Back by popular demand, here’s “Ten Lessons Learned…” on the Everest Base Camp Trek:

1. Getting the most obvious out of the way first: seeing Mount Everest is insane, offering up feelings of awe and accomplishment.

At 8,448 meters, the tallest mountain in the world is a sight to behold. The best view of Everest did not come at Everest Base Camp, but at Kala Patthar (5,545 meters) – a nearby mountain which required us to huff up a steep 500 meters. Even then, Everest only peaked out at us behind two shorter mountains (in the pictures below, it’s the black, not-so-snowy peak behind the larger seeming, very snowy mountain).

View from Kala Patthar (Everest is the Tall, Black Mountain in the Back on the Left Side)

Still, the sight from Kala Patthar was breathtaking, especially when combined with the horizon, which was filled with the snow capped peaks of many of the world’s tallest mountains.

2. Ironically, you don’t see all that much of Mt. Everest on the trek to Base Camp. But, there are even more beautiful landscapes and mountains along the way.

Everest is a “shy” mountain, often shrouded in clouds. Even when it did emerge, we mostly only saw a tiny peak strutting out behind other mountains, deceivingly hiding how tall the mountain actually is (apparently the best views are on the Tibetan side, if you can manage to obtain a visa from the Tibetan Chinese overlords). At first, we actually had to ask people which mountain was Everest to confirm our suspicions. 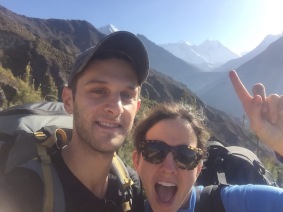 Mount Everest Peaking Out Behind Mountains (Day 3 of Hike) 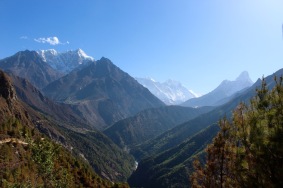 Mount Everest Peaking Out Behind Mountains (Day 3 of Hike)

Surprisingly, some of our favorite views of the trek were not of Everest, but instead found along the way to the mountain.

Village and Bridge Amidst Mountain Backdrop (Day 2 to Namche Bazaar) 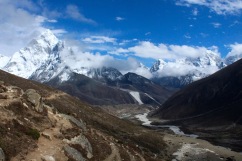 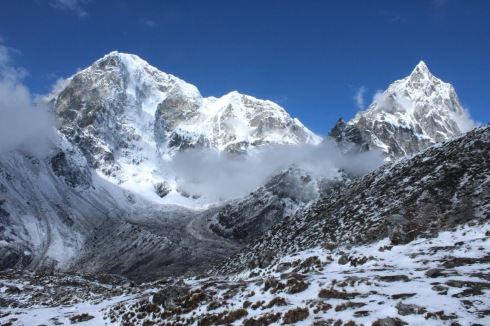 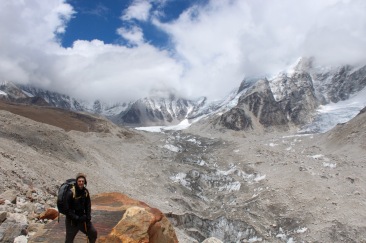 3. Flying in and out of Lukla to begin the trek to Everest is near impossible – leave several days on both sides to allow flexibility.

We eagerly arrived at the Kathmandu domestic airport clad in trekking gear, only to be introduced to the madness that is flying into the foothills of the Himalayas.

First, the airlines (Budda Air, Yeti Air, Gorkha Air…) are completely rookie with no sense of schedule or communication. Show up at 6:30 for your 8:30 flight? Your ticket will suddenly read 7:40 and the hours will tick by without any update. At some point, you should probably just leave to get lunch because you are more likely to miss restaurant lunch hours than your flight.

Second, flights are regularly canceled. Rapidly changing Himalayan weather combined with the fact that the Lukla airstrip is frighteningly short, confusingly slanted uphill and tightly tucked between mountains, makes the Lukla airport one of the most dangerous in the world. The Airlines are now super conservative and don’t risk flying in if there are many clouds.

Third, because of 1 and 2, and the relatively short trekking season, dozens if not hundreds of trekkers and climbers are always stranded in both Kathmandu and Lukla clamoring for flights on clear days. If you aren’t aggressive, you will “miss” your flight and be bumped.

4. Don’t worry though, worst case scenario you can cough up for the helicopter ride of a lifetime.

Luckily, there are a handful of enterprising Nepali men eager to make a quick rupee out of impatient trekkers. After hours of waiting at the airport and not wanting to delay our trek or risk a dangerous landing, we finally spoke to the helicopter brokers. After first being told that there were no available helicopters, we were suddenly shepherded away and buckled into a helicopter (laden with emergency response and USAID stickers).

Before we knew it, we were flying above Kathmandu, marveling at the scenery below – and at our pilot’s ability to navigate over, around and between the foothills of the Himalayas. An hour later we were thrilled to have finally made it – only be told that we were actually 30 minutes “down” from Lukla. No problem, we thought until we started climbing and realized that we were indeed “down” from Lukla. After a two-hour climb up, we finally made it to Lukla just before the sun set. 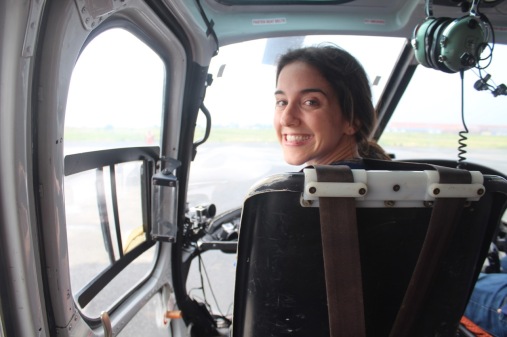 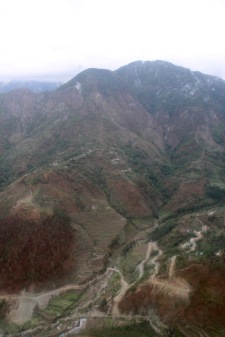 View of Kathmandu Valley from Chopper

Limited View from Helicopter Because of Weather

Luckily, on our way out of Lukla back to Kathmandu, our flight was one of the few to get out. It was definitely a stomach dropping ride as you lurch off the runway straight into the mountains.

Yeti Air Flight Back to Kathmandu 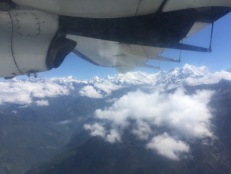 5. Altitude sickness is a real thing.

After spending considerable time at high altitude in Bolivia and Peru, we assumed that we wouldn’t have too much trouble with the altitude in Nepal. We. Were. Wrong.

Acute Mountain Sickness occurs at high altitudes where there is low partial pressure of oxygen – by our second day on the trek the oxygen level had dropped to 66% compared to sea level and by Base Camp it dropped to 50%. A nearly constant and steadily increasing headache plagued us as our bodies tried to cope with the reduction in oxygen.

Don’t be tempted by stories of people finishing the trek in 7 days. Even our 12 days was too fast. Take extra time doing side trips to acclimatize. We paid for our overambitious behavior by spending our time above 5,000 meters with swollen brains and aching heads (not to mention huffing and puffing at any small amount of exertion).

6. Climbers summit Mt. Everest in May, making it a truly special time to be in the Khumbu Valley.

Over 200 visitors from all over the world summited Everest this year. After catastrophic accidents led to closing the mountain the past 2 years, this year was widely considered a success (despite 5 deaths). Crossing paths with climbers is nothing short of epic. You can usually recognize the horribly sunburnt and sometimes frostbitten climbers.

Alie continuously tried to befriend the exhausted strangers by asking them dozens of questions and telling each one “you are my hero” (to which they kind of shrugged like, “umm okay, it’s not like I spent years of training, tens of thousands of dollars, and risked my life to be your hero, strange girl”). It was fascinating to hear their stories and look at their pictures. The air of excitement made the trek to Base Camp that much more thrilling.

Tents at Base Camp

View of Base Camp

Tents at Base Camp

View of Base Camp 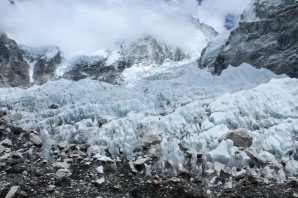 Ice Fall at Base Camp (First Step for Climbers)

Surging Water From Melting Glacier at Base Camp 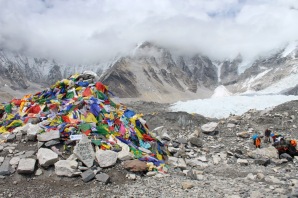 Prayer Flags at Base Camp

7. Speaking of sunburnt summit climbers… wear 70x the amount of sun protection as usual throughout the trek.

Apparently UV exposure increases about 13% every 1,000 meters, meaning that UV exposure at Base Camp was increased by over 70%(!). Add on the reflection of the sun on snow and getting sunburnt is essentially inevitable. For Alie this was a disaster waiting to happen.

Despite religious hourly applications of SPF 60, Alie still managed to get sunburnt on the second day (still at relatively low altitude). So, we resorted to covering her from head to toe, resulting in this fashionable outfit that Michael dubbed “the bandit” look:

Alie in Full Bandit Gear Hiding from the Sun

Alie in Full Bandit Gear Hiding from the Sun

Somehow her scalp still got ridiculously burnt, but otherwise we came away unscathed. Don’t fool around here. We saw some pretty horrific burns.

8. Yaks and Sherpas always have the right-of-way.

In mountain villages without roads, goods are moved by way of yaks and (superhuman) sherpas. They carry loads 2-3 times the size of a person and move at twice (okay, 4 times) your speed. Get out of their way.

Yak Carrying Fuel to Base Camp

Yaks Crowding the Road to Debuche

Yaks Crowding the Road to Lukla

Yak’s Impeding Our Way Across the Bridge 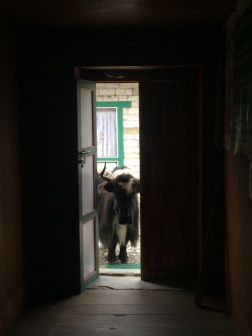 Yak Attempting to Break In To Our Tea House

The sherpas are friendly and do have good manners. But, they are carrying a refrigerator on their back 3,000 meters uphill so that we foreigners can enjoy a cold bottle of water at Base Camp (despite a virtually limitless source of some of the world’s purest glacial water). They are exhausted and carrying three of you. Make their lives easier and move.

9. Tea Houses – your only source of accommodation and food along the trail – are both amazing and awful.

One of the most unique aspects of trekking in Nepal are the tea houses – small, basic lodges set up by locals in villages along major trekking routes. It is a luxury to finish each day of trekking with a bed, bathroom, and hot meal. But, be warned…

There is no heating in the rooms and there are often no blankets. You will be freezing by the third night (when it is snowing outside), so bring a sleeping bag. Also, the room walls are plywood, so yes, that noise you hear is the man next door snoring. Bring earplugs.

The bathroom is a squatty toilet for you and every other trekker to share. And a warm shower? Yours for 2-3x the cost of your room.

The only furnace, used to heat the restaurant/kitchen, uses dry yak poop as fuel. On the plus side, it’s extremely sustainable and you have a warm restaurant to escape to from your freezing room. On the minus side, burning yak poop does create a distinct odor, and you will associate that smell with the place you eat in. Also, that tea that costs 10 rupees in Kathmandu costs 50 in Lukla and 350 at Base Camp. The cost of everything increases exponentially the farther you get from the main villages.

Still, we enjoyed our time in the tea houses. Even though we would hike 4-8 hours per day, since we started each day fairly early we would have a lot of downtime to relax in the tea houses. We passed the time with a combination of reading, socializing and playing many, many rounds of card & board games. 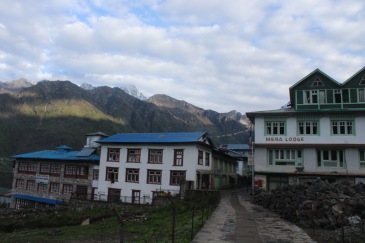 Tea House at Gorak Shep (Near Base Camp) (Day 8)

Inside of Tea House Restaurant – View of Yak Poop-Filled Furnace

10. Get a massage upon returning to Kathmandu.

No need for explanation here… Seeing Hands is a charitable organization which employs blind Nepalis as massage therapists. They are amazing (though sometimes painfully so) and provide a livelihood for one of the largest blind populations in the world. We highly recommend.

A trip to Nepal is not complete without a trek – we cannot emphasize this enough! 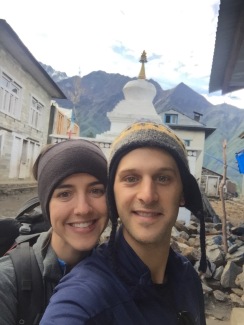 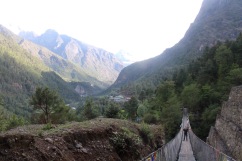 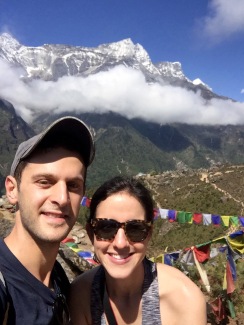 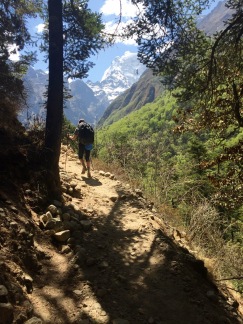 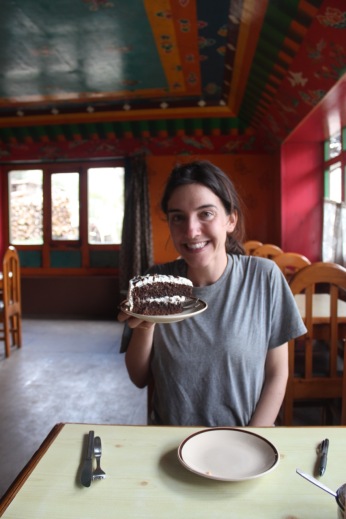 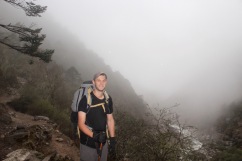 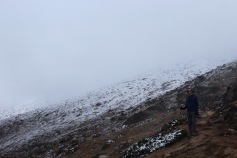 Limited View in Fog and Snow Enroute to Dughla (Day 6)

View of Mountains from Dughla (Day 7) 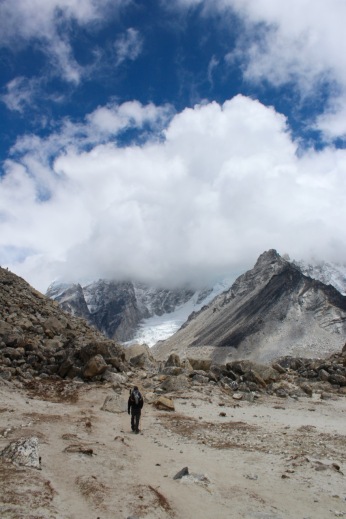 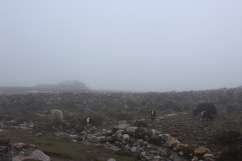 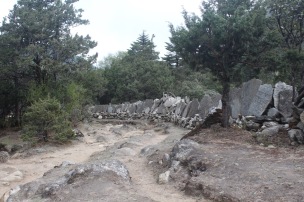 Funny Shirt in a Tea House From Fellow Recent Honeymooners 🙂